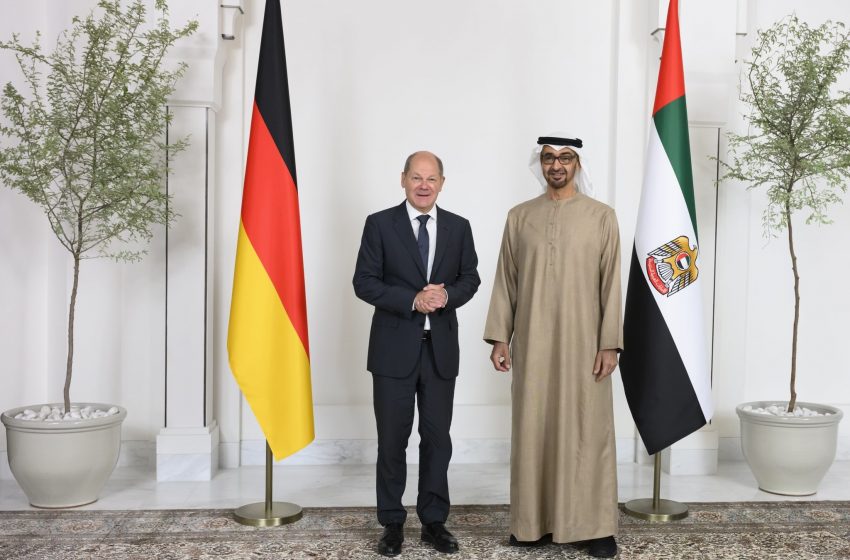 President His Highness Sheikh Mohamed bin Zayed Al Nahyan today received Olaf Scholz, Chancellor of the Federal Republic of Germany, who is on a working visit to the UAE.

During the meeting, which took place at Al Shati Palace, President His Highness Sheikh Mohamed welcomed the German Chancellor, wishing his friendly country and people continued progress and prosperity.

The two sides discussed paths of cooperation and opportunities to enhance the comprehensive strategic partnership that brings the two countries together during the next phase, especially in the economic, investment and trade fields, in addition to renewable energy, food security, advanced science and technology, and joint efforts in tackling climate change and protect the environment and its sustainability.

President His Highness Sheikh Mohamed and the German Chancellor also reviewed an array of issues and developments on the regional and international arenas and exchanged views on issues of common interest, emphasising in this context that cooperation and dialogue and giving priority to diplomatic solutions is the way to address various issues and crises, maintain economic growth and political stability, and achieve a better future for present and future generations.

The two sides expressed their aspiration to work together to achieve further development during bilateral relations and to build on what has been achieved over the past years.

The meeting also touched on the importance of the Conference of the States Parties to the United Nations Framework Convention on Climate Change (COP28), which will be hosted by the UAE next year.